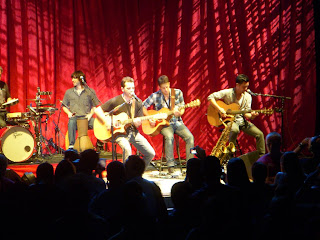 August 7, 2009. HS and my other friends went to Merriweather Post in Columbia, MD to watch the O.A.R. (Of A Revolution) "This Town" concert. There were hundreds, maybe thousands of people there that night. We got V.I.P. seats, with backstage passes. Our seats were so good, in fact (first row on the platform), that we were able to watch the whole concert sitting down, even though everyone else in front were all standing up and dancing! I danced too...in my seat. That's for shyer, more inhibited people who can just sway a little and bounce their heads up and down with the music.

The music sounds even better live than on CD. I particularly liked the drums interlude during "Lay Down," where Chris, Jerry, and Mike went at it for at least 3 minutes. Jerry is really impressive. He was, at different times, playing the saxophone (it has become one of my favorite instruments!), the drums, and the guitar, as needed. Richard sometimes switched from the keyboard to his guitar. The fans favorite, of course, was "Crazy Game of Poker," which everyone recognized immediately. Everyone jumped up and danced wildly. You can't help it, especially at the fast, almost country inspired part of the music. It wasn't just my head bobbing then. My shoulders would sway back and forth a bit, too. What an achievement!

The O.A.R. guys are a bunch of cool guys on stage. They wear ordinary jeans and t-shirts. They walk around casually, without any fancy blocking or choreography that reminiscent of the Mickey Mouse Club. They're relaxed, they don't try too hard. The only thing that comes out from them is their music. Their talent is what draws the crowd's attention, not looks, not choreography, not the set.

Supposedly, O.A.R. is one of the oldest bands in the industry. They've been together since 1996. I haven't seen many concerts, but I do know that when it comes to bands, only the lead singer becomes popular. For example: Tony Hadley and Spandau Ballet; Sting and the Police...the list can go on and on. For O.A.R., though, each member has their own time in the spotlight. Richard gets his own guitar solo, Chris gets his own drums highlight. Benj with his base guitar and Jerry with his saxophone, all have their own time airtime. I think that's what I like best about them. They share!

So in summary, I would say, these guys are so down to earth, they seem just like your buddies. It just turns out that they're really talented musicians...and they rock! 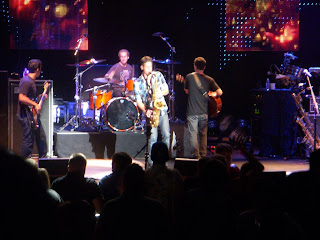